Acid deposition and its effects on ecosystems is a long-standing research interest. Acid deposition is elevated concentrations of strong acids deposited to the Earth’s surface as a result to emissions of fossil fuels. Acid deposition has acidified soil and water in sensitive regions resulting in adverse effects on aquatic organisms and trees. Emissions of acidifying air pollutants peaked in the U.S. and have decreased markedly in recent decades, due to air quality legislation and rules. With Zhengwei Wang, a scientist from the Chinese Academy of Sciences, a synthesis of acid deposition and its effects was published in the Encyclopedia of Water: Science, Technology, and Society (Driscoll and Wang 2020).

With the New York State Department of Environmental Conservation, the Adirondack Lakes Survey Corporation and the U.S. Environmental Protection Agency, we monitor the chemistry and fisheries of 52 lakes in the Adirondack region of New York. Inputs of acid deposition have decreased markedly in recent years due to air emission control programs (Figure 1) and this has resulted in some improvements in the chemistry and fisheries of acid impacted streams and lakes in the Northeast (Baldigo et al. 2019). We also completed an analysis of critical loads of acidity on stream ecosystems in the Adirondacks (Shao et al. 2020). Critical loads are a determination of levels of atmospheric deposition, below which will alleviate adverse ecosystem effects. 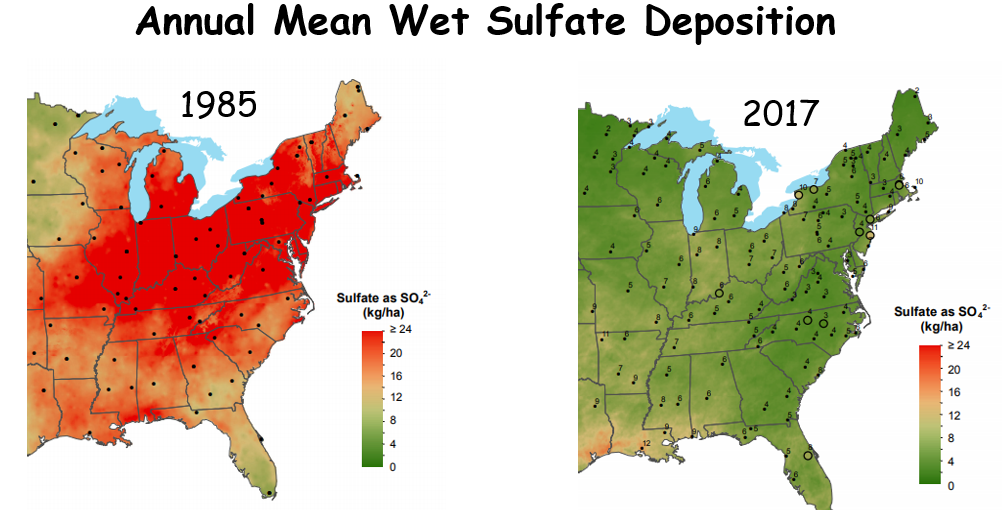 I have expanded my research on acid deposition effects to contrast these with agricultural amendments of sulfur. In developed countries, continued calls to reduce sulfur emissions arising from fossil fuel combustion are mitigating the largest manipulation of the global sulfur cycle to date. However, anthropogenic modification of the global sulfur cycle continues. Currently, high rates of sulfur applications to economically important crops at local-to-regional scales represents a major perturbation to the global sulfur cycle. Long-term sulfur additions to crop lands likely result in many of the same consequences for soil health and aquatic ecosystems observed in forested regions historically impacted by acid rain, yet this cascade of effects has not been broadly explored.

Over the past few years, I have worked with Eve-Lyn Hinckley (University of Colorado) to characterize and quantify effects of agricultural application of sulfur on ecosystems, contrasting these with the well-established effects of atmospheric sulfur deposition (i.e., acid rain).  We found that with decreases in atmospheric sulfur deposition, fertilizer sulfur application rates have increased to make up this reduction. The sulfur addition rate for agricultural applications is more intense at the local scale but the areal extent is smaller than for atmospheric sulfur deposition. However, over the coterminous U.S. the total application of agricultural sulfur amendments is comparable to that experienced from atmospheric deposition. This analysis was recently submitted for publication in the journal Nature Geoscience (Hinckley et al, in review). We are planning a research project to examine the roles of climate, hydrology, and other element cycles in modifying sulfur processes and flows within and down gradient of agricultural source areas.

Finally, 2020 is the 50th anniversary of the Clean Air Act.  To commemorate the accomplishments of this legislation, I helped organize a session at the annual meeting of the National Council for Science and the Environment (Washington D.C., January 2020) on “The Clean Air Act and the Science Policy Interface” in which the health and ecosystem effects, mitigation and future interactions with climate change were discussed for acid rain, mercury, and carbon.